My personal entanglement with this Japanese-held belief began on a glorious autumn afternoon in 1977. I was traveling the quiet byways of far northern Honshu, Japan. The trees had donned their brilliant autumnal colours, and I was mesmerised by their absolute brilliance. Amongst this kaleidoscope of mixed colours and hues I spotted a curious roadside signpost pointing the way to the Grave of Jesus Christ.

My curiosity was instantly aroused and I set off on foot along a short path amongst the most glorious autumn display imaginable. Within a minute the path opened onto a small clearing wherein two wooden crosses, each atop their own earthen mounds, stood. Etched into the crosses and on adjacent signposts was the Star of David. To my surprise a few people were praying or paying homage at the base of one of the mounds - the one, according to a signboard, was the grave of Jesus Christ: the other burial mound belonged to the brother of Jesus.

Before long an elderly Japanese woman approached me and began to explain, in her limited English, how her family had been entrusted with the upkeep of the graves through countless generations. She also explained how Jesus had escaped the crucifixion by having His brother take His place instead. Jesus then travelled to Japan where he eventually married a local girl and had several children and eventually died at the age of 106.

Sensing my disbelief, and to my surprise, she offered to take me to her home nearby, in the small village of Shingo (Hometown of Christ), in Aomari Prefecture, and show me artefacts which would substantiate the story. In 1977, and in such an out-of-the-way part of Japan, westerners were rarely if ever seen. She was obviously keen to spread her story.

Once comfortably seated on the tatami floor of her modest house, and over a cup of hot green tea, as is the custom in Japan, she proceeded to explain how she is a descendent of Jesus Christ. She showed me old photos of ancestors who, according to her, had middle-eastern features. Amongst other things she went on to explain about an ancient 1,500 years old Japanese document: the Takenouchi Document, of which she claimed to have a copy that not only supported her claims, but also detailed the hitherto unknown real history of humankind. I asked her, in my limited Japanese, to show me the ancient document but she refused, but she did show me two photographs of what she claimed to be the two Commandment Stones brought to Japan inside the Art of the Covenant by Moses thousands of years ago.

I politely finished my tea, thanked her for her kindness and interesting story and bade her farewell - quickly.

The thought of Jesus Christ escaping the crucifixion, and the wide-spread Japanese belief of Jesus and Moses coming to Japan held me in total disbelief as it still does today; but it did arouse a healthy curiosity about who was behind it all, and why? What is to be gained by such an elaborate fanciful story complete with well-tendered burial mounds, wooden crosses, merchandise and annual Christ Festival?

This 1,500 years old document, which is claimed to have been stolen by Japanese Government officials, details the origins of humankind having been created by Gods in the Land East of Eden - namely Japan. Japan's sacred Mt Fuji is revered as the navel of the Earth as testimony. As humanity matured, the governance of humanity was gradually passed down from the Gods to the Japanese Emperors who also rightfully assumed Godly status and colonised the planet traveling in spaceships. The Takenouchi Document purports to show detailed maps of those travels, where they landed, where they constructed pyramids used to communicate with the Gods.

The Document also describes the travels and arrival of Moses on Japan's west coast carrying the Art of the Covenant containing the Commandment Stones. He spent time in Kyoto, Japan's ancient capital, and declared that Japan was the real land of Canaan. We read how the Ark and its contents are now the property of the Japanese Imperial family. Mohammad also visited Japan and studied esoteric teachings here.

The Japanese Royal Imperial crest features the 16 petals of the chrysanthemum which represents the 16 points of the compass the early Emperors dispatched their sons and daughters to in order bring peace and learning to the world.

The burial mound of Moses is also open to the public at Mt Hodatsu, Ishikawa Prefecture in Western Japan. It's also well signposted. 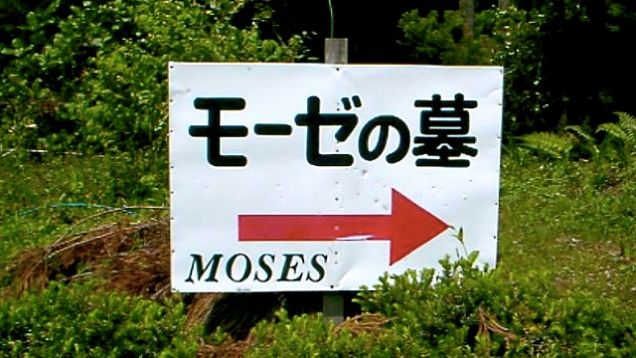 Stories of civilisations turning away from the Gods abound, and so too did ancient civilisations in the Pacific Ocean which subsequently sank below the water. Once of these, Mu or Lemuria, had the six-pointed star as its symbol, and we read how present day Japan is that part of Mu that didn't sink. This explains why the Star of David, with its six points, is also the crest of the Japanese Imperial family and can be found at Jesus's grave. I also saw the Star emblazoned upon hundreds of stone lanterns leading the way into the Shinto's most revered shrine complex at Ise in Eastern Japan. This Shrine is to the Japanese as the Vatican is to Catholicism. Here, I saw a beautiful white horse corralled and on view for the eight million pilgrims who visit this revered site annually. I was told this horse is the Emperor's: the one who, riding upon a white horse, will set the world free. Japanese Emperors only ride white horses.

"Then I saw heaven open and there was a white horse. Its rider is called Faithful and True....His eyes were like a flame of fire, and he wore many crowns on his head....The armies of heaven followed him riding on white horses...on his robe and on his thigh was written the name: King of kings and Lord of lords." Revelations 19:11 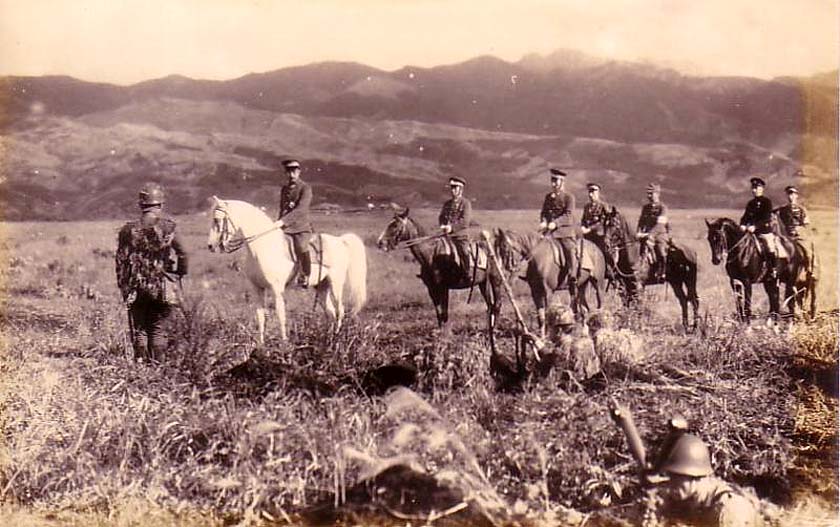 By now some readers may be thinking the Takenouchi Document seems a little nationalistic. They are. This is because they serve various propagandist agendas, firstly: to place Japanese Emperors firmly at the centre or top of world events - meaning a global theocracy ruled over by Japanese Emperors. Secondly: to instil the belief in the Japanese people they are the chosen ones ruled directly by a God Emperor destined to rule the world.

Fortunately, nowadays many Japanese people believe the Document to be a hoax since no one has actually seen the original document. Conversely, many do believe and accept the Takenouchi narrative, particularly those in power perusing a nationalistic Japanese global theocracy agenda.

Japan's most successful propagandists are historically to be found within the various ranks, divisions and invisible wings of the Japanese military. Here still lurk a wide variety of hidden societies and cults, with the most powerful amongst them being the Green and Black Dragon Societies. These occult societies were tasked with, amongst other things, stirring up nationalism, fanaticism and martyrdom amongst the military and civilians to further justify and solidify the supremacy of the Emperor and the nation of Japan. Collectively they succeeded in establishing the most deadly of all cults ever  - the Emperor Worship Cult, and as we say: "the rest is history."

The Takenouchi Document was studied in Military Academies as justification tools of conquest as was the notorious anti-sematic manuscript: the Protocols of Zion, which is a cunning blueprint for global supremacy purportedly written by Jewish Freemasons, although its authorship is still widely questioned. This widely circulated manuscript, which was imported into Japan from Russia in 1920, consists of 24 chapters each dealing with specific components to be enacted in order to create a global theocracy. Chapter 23, last paragraph was/is of particular interest to the Japanese military since the "seal" and "his star" references within that chapter are known to refer to the Star of David, or as we also now know: the symbol of the Japanese Imperial family. This chapter calls for total submission to the new King who will rise up in a time of great tribulation and create a new utopia and set us free.

This Chosen One of God is chosen from above to demolish the senseless forces moved by instinct and not reason, then will it be possible for us to say to the peoples of the world: "Give thanks to God and bow the knee before him who bears on his front the Seal of the predestination of man, to which God himself has led his Star that none other but Him might free us from all the before-mentioned forces and evils". Protocol 23. 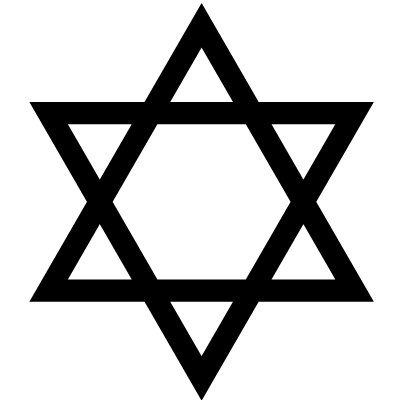 Many religious and esoteric teachings were studied at Japanese Military Academies, with particularly focus on passages that further reinforced and justified their absurd and deadly idealism.

During the pre-war period the Japanese Military enlisted the help of master propagandist and ultra-nationalist writer, religious scholar and agitator, Shumei Okawa, who was put to work by the Military Academies propagandising religious and esoteric texts which could be twisted to suit the Military's agenda. Okawa was also the first person to translate the Koran into Japanese. After the war he was convicted by the allied forces as a class A war criminal for his efforts in agitation and stirring up justification for the war. He became known as The Japanese Goebbels.

Okawa and his underlings became fascinated by the Koran's ability to instil a sense of willing martyrdom amongst some of its adherents - a very valuable tool indeed, and thus the Japanese Kamikazi or suicide fighter pilot was born. Kamikazi means: The Divine Wind.

Delving further into the Koran they were further bemused by Verse 157 - 159 of 176, wherein Allah unambiguously explains how the Messiah Jesus, the son of Mary, the messenger of Allah was not crucified on the cross but another was substituted in his place. 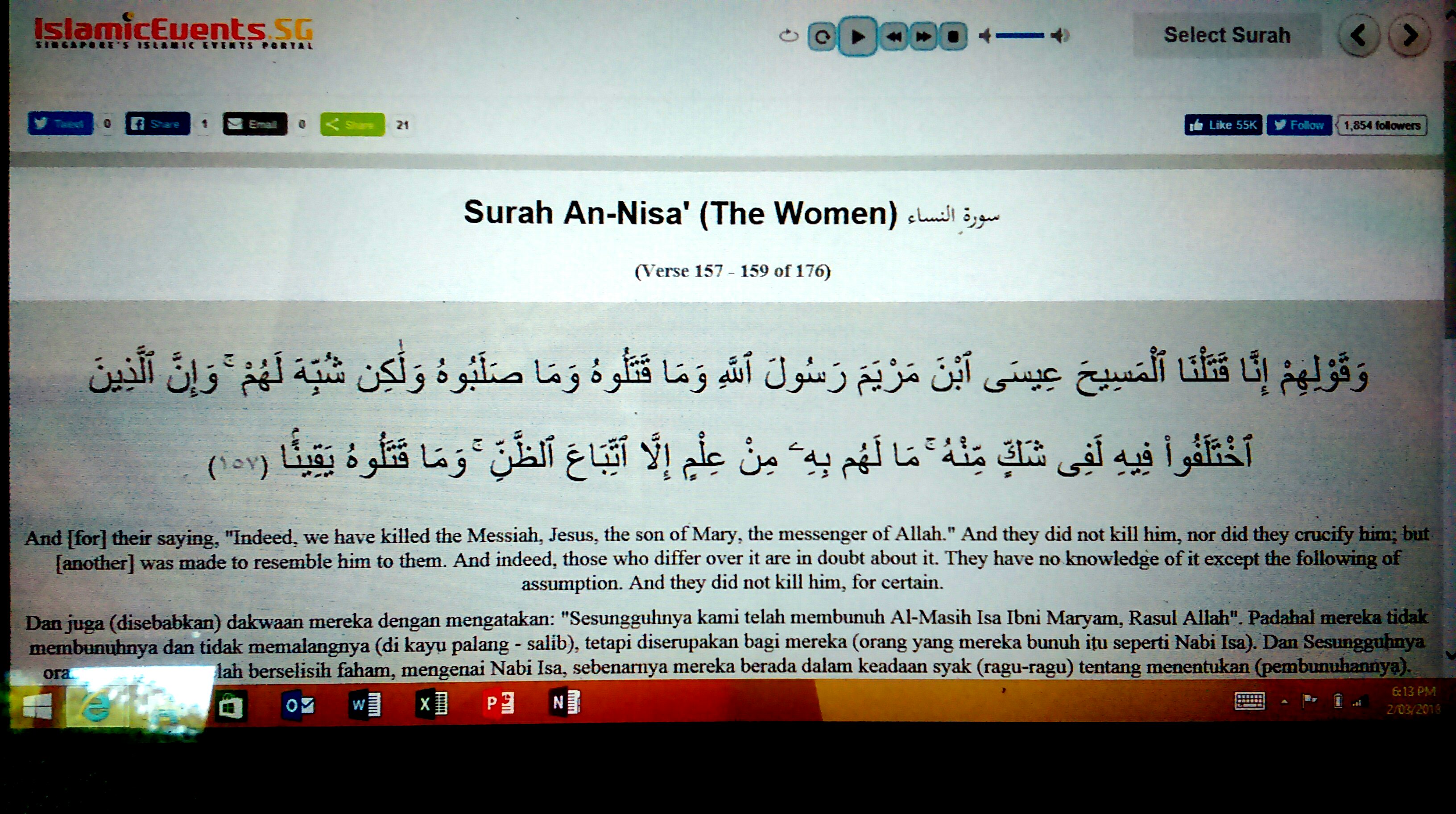 It is my belief, and the belief of other researchers, that the Koranic Verse 157 combined with the Takenouchi references to Jesus and Moses visiting and living in Japan are the driving forces behind the Japanese Military and the Dragon Societies hidden within, in establishing the Jesus and Moses burial mounds in Japan and all the continuing propaganda associated with them.

What first appeared as just a curious and harmless meme hidden amongst the verdant forests of far northern Japan is but one of the many faces of something very sinister indeed. It's a meme that still lives on, hibernating as it were, waiting for when the conditions are right to re-assert its self-appointed and prophetic narrative. Up till now, this mother of all memes has resulted in the most deadly of all conflicts in the known history of humankind - the War in the Pacific.

The aforementioned essay now begs the question: what other deadly and divisive cultural, political, religious or otherwise memes are out there somewhere quietly fermenting upon the destiny of humanity?

For more detailed information and references regarding this Mother of all Memes and related issues read Garry Greenwood's ebook available here: All The Emperor's Men.

Read how the forever-ongoing catastrophic Fukushima nuclear power station triple meltdowns has now morphed into a Weapon of Mass Revenge and exactly who its main targets are.